From left to right: Kelly McDowell, Jennifer Weaver, Janet Burke, Ruth Plowright, Debbie Gee, James C Webster, Dan Bernhard, Debbie Fawcett
The Horning’s Mills Community Hall has been an important venue for community events, fundraisers and private functions for generations. Community volunteers and Hall Board members work to support the operation and upkeep of the historic Women’s Institute building with community events and fundraisers that bring neighbours together throughout the year. The Board now extends many thanks to Dufferin Wind Power for their generous contribution to a building which continues to be a center for this small but vibrant community.

In response to a request from the volunteer run Horning’s Mills Community Hall Board, Dufferin Wind Power Inc. has graciously donated $13,000 to cover upcoming necessary renovations to the building. Dufferin Wind Power is proud to support the facility’s continued use as an attractive and enjoyable central meeting place for all residents of Melancthon and their families by sponsoring a wave of upcoming upgrades and improvements.

The Hall Board is grateful to be able to further preserve and update the Hall, an important public building that the community feels very fortunate to have. The Hall Board looks forward to lots of fun events in the near future, not only because the renovations will improve the function and appearance of the facility, but because this donation relieves the financial pressure that the Hall Board was faced with for expensive renovations that are needed such as updates to lighting, kitchens, and bathrooms. Thanks to this sizeable donation, volunteers will be able to focus their time and efforts on creating fun events that keep families, friends and neighbours coming together to break bread and celebrate special occasions.

For more information on upcoming events, or to rent the Hall for your next party, shower, birthday, wedding, class or meeting, visit the website at www.horningsmills.ca where you can also sign up for the e-newsletter. For updates on the Hall and events happening in the community, follow Horning’s Mills Community Hall on Facebook.

The next community dinner at the Horning’s Mills Community Hall will take place on Saturday October 22nd, so watch for details and reserve your tickets to this popular event.

Agriculture and Wind Power are both prominent features on the local landscape and each can benefit from what the other offers.

Dufferin Wind Power has proudly supported the surrounding agricultural communities and their rural culture by sponsoring the Shelburne and Dundalk fall fairs at the Diamond Level ($1,000) or higher since 2012.

On June 26th, Dufferin Wind Power hosted a backyard-style Barbecue and invited all project participants including private landowners and their families. The rain held off, but average to strong winds arrived to take part in the fun.

Some Guests enjoyed mingling with their neighbours while others took a rare break from the busy haying season. Everyone had the opportunity to talk with staff of Dufferin Wind, Longyuan Canada Renewables and GE Wind.

The spread was barbecued chicken, sausage, plentiful side dishes and apple crumble pie prepared by Lavender Blue catering. Some highlights of the event were mini golf on the front lawn and an all-ages bouncy castle!

We were pleased to send our project participants home with gifts of appreciation like mugs and Frisbees, an increased sense of community, and peace of mind knowing the Dufferin Wind Power staff are always willing to help and communicate. 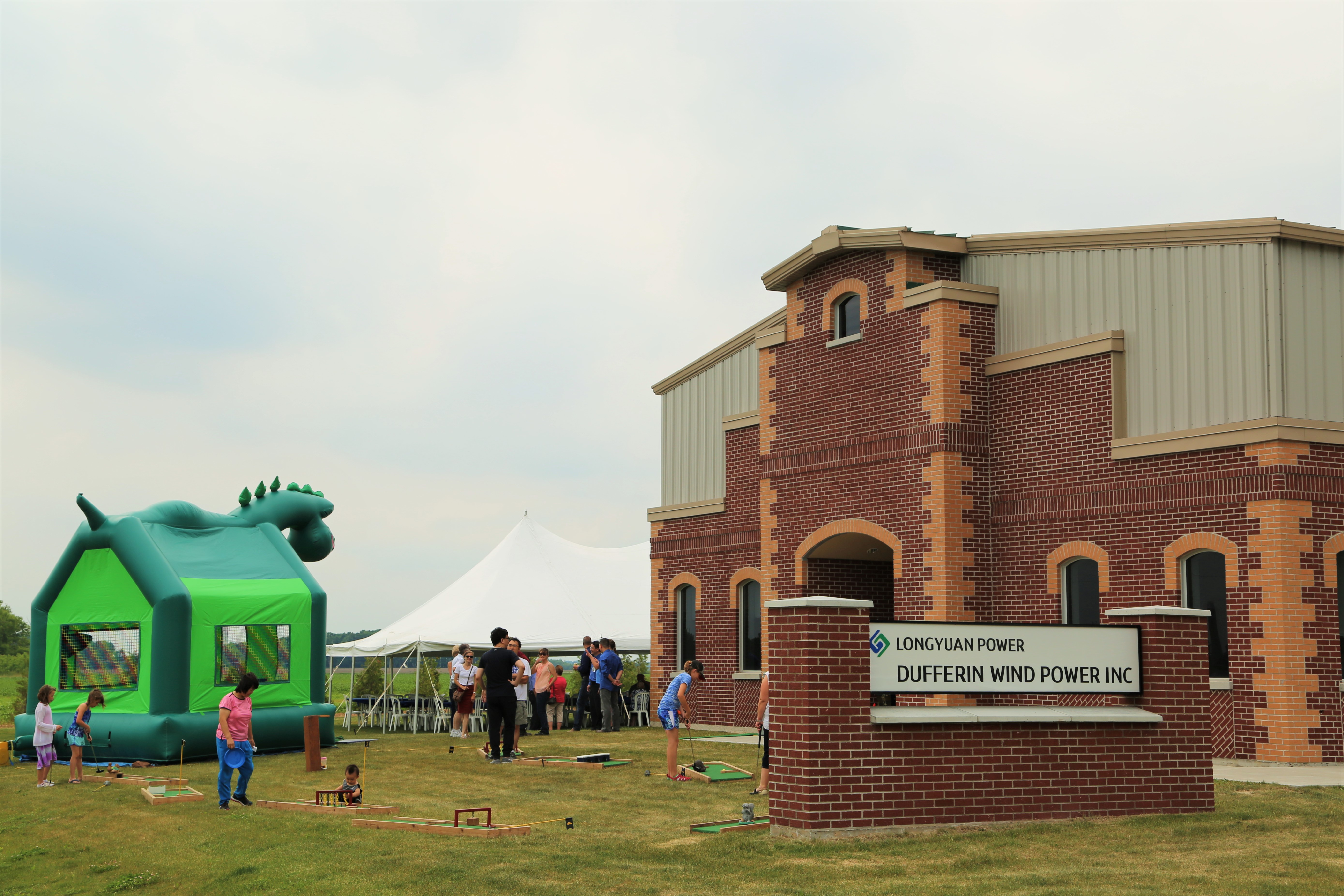 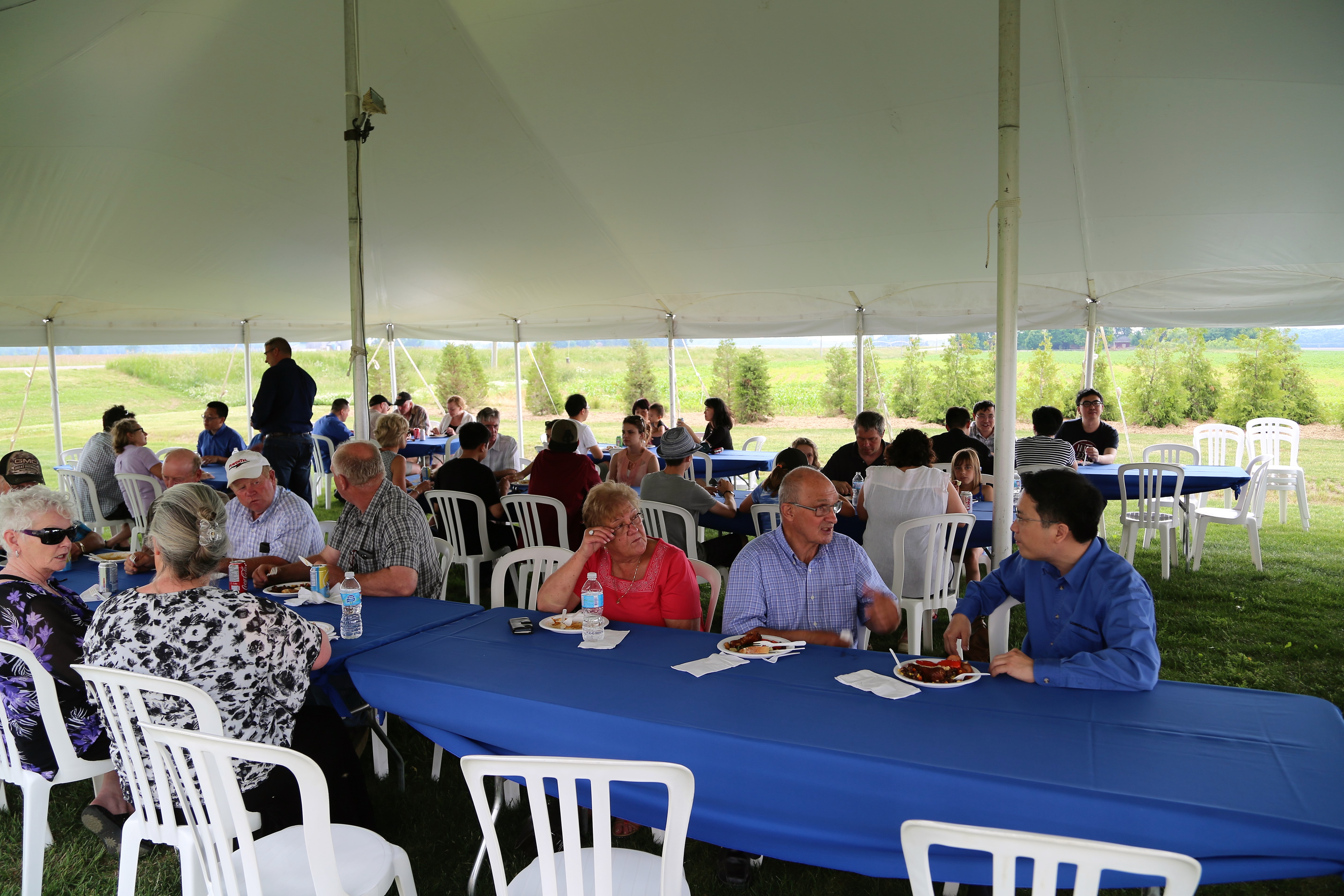 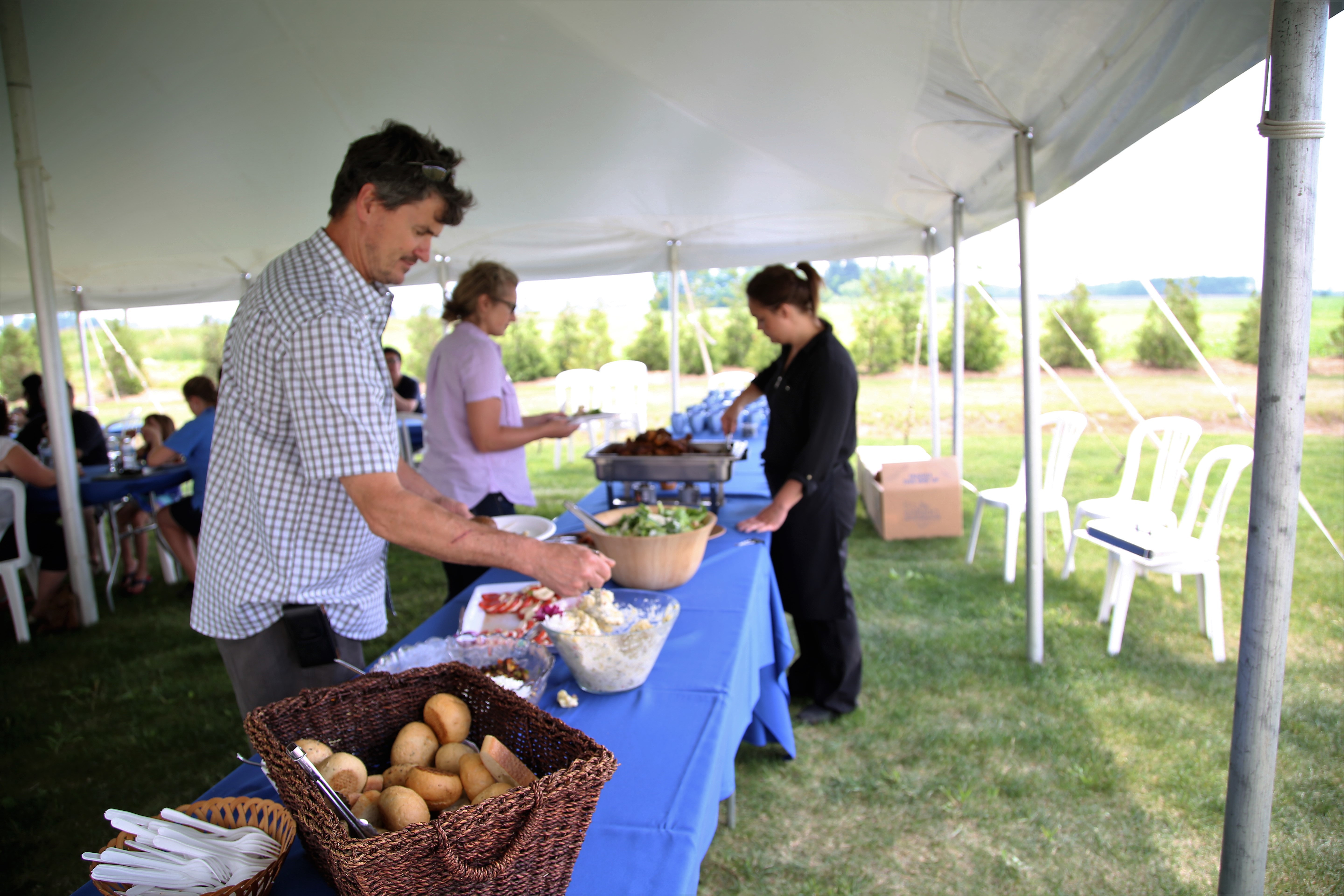 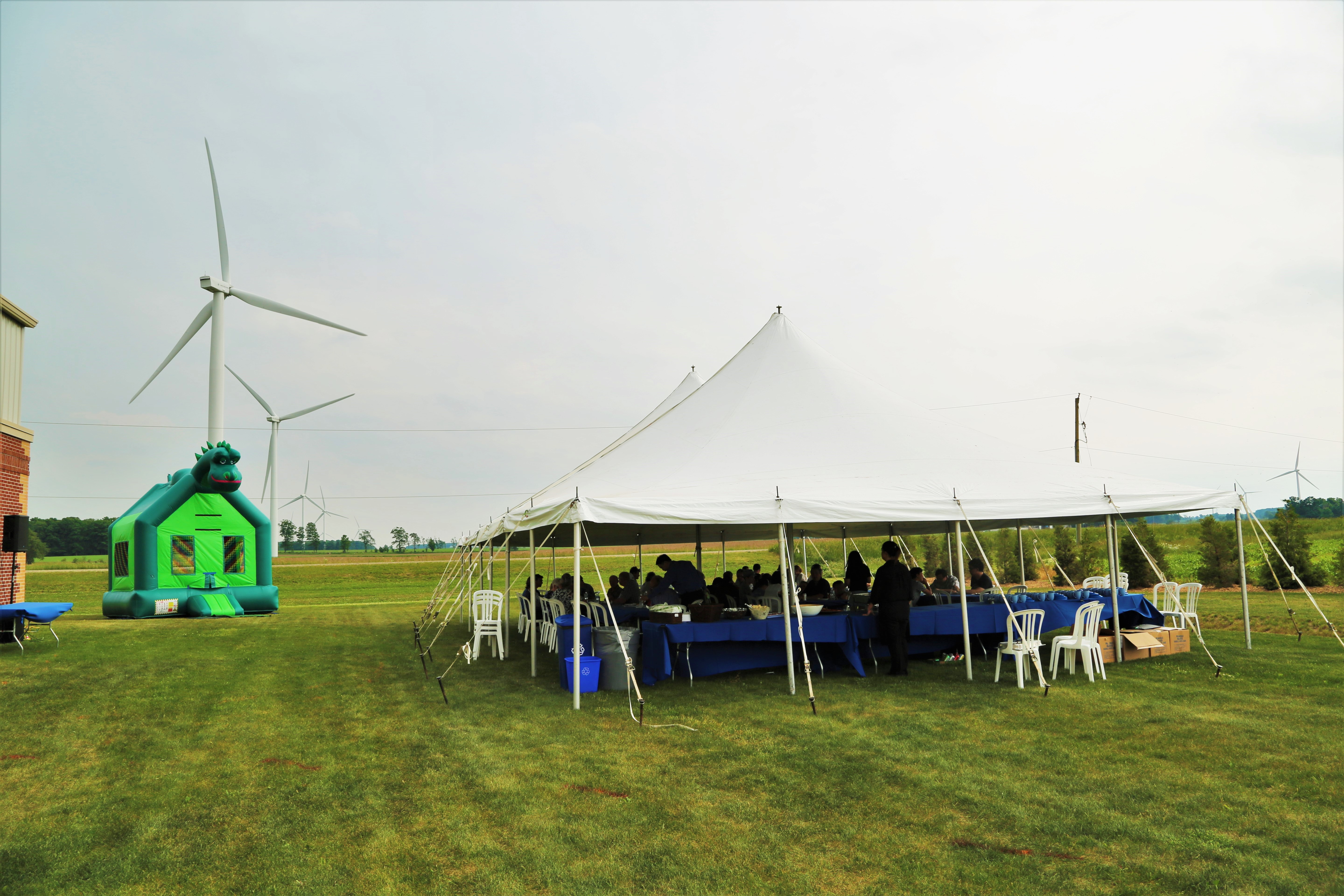 Dufferin Wind Power has supported the Shelburne Christmas Assistance Hamper Program for several years, however this year’s donation was a little different.

With the support of our Maintenance Team from General Electric, Dufferin Wind Power collected non-perishable food items and $400 in cash donations to be delivered along with 10 turkeys – just in time for the annual distribution to local families in need.

Dufferin Wind Power would like to thank all the volunteers from the Shelburne Rotary, Lions and Kinsmen clubs whom joined forces to make this year’s program a success, and Bobbi Ferguson for taking on the demanding role of coordinator.

FIREWORKS at the Dundalk Fair

On Saturday, September 12, 2015 Dufferin Wind Power helped celebrate the 160th anniversary of the Dundalk Fair by sponsoring a Fire Works display. This event brought  friends, families and neighbors together – and we want to thank you for joining us!

From your friends at Dufferin Wind Power

Dufferin Wind Power was very pleased to support the Shelburne Fall Fair and to offer residents of our community the opportunity to attend the fair free-of-charge on Sunday, September 20, 2015.

We hope you enjoyed the fair!

The Tree Giveaway was accompanied by a catered barbecue with more than 500 people attending. At least 325 orders were filled on Saturday, and all the trees were distributed to their new owners before the end of the four-hour event.

Dufferin Wind Power acknowledges and appreciates the help of Glenn Lundy and team, Dillon Consulting, GE and our own staff for working diligently and courteously to ensure our Melancthon neighbours received their trees.

The average property owner took advantage of the maximum tree allotment, and received five trees per household. About 50 leftover trees will go to the Township of Melancthon and have been earmarked for planting. 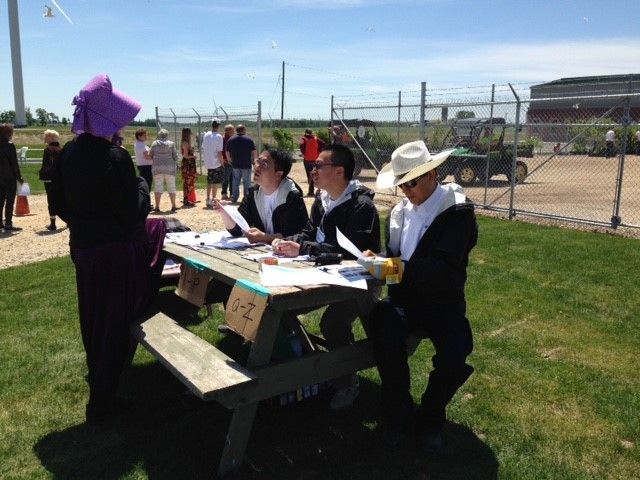 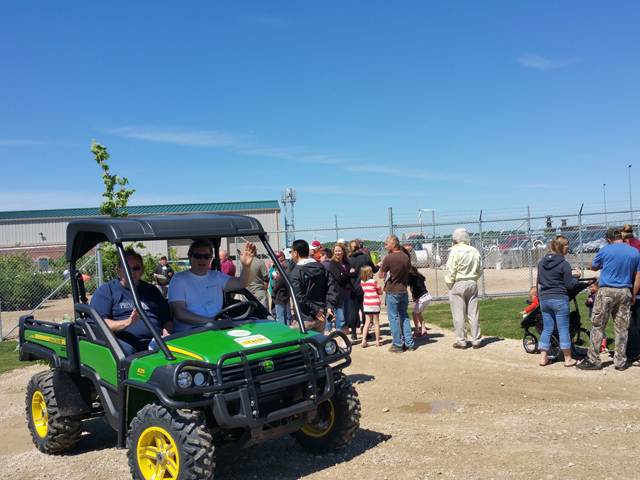 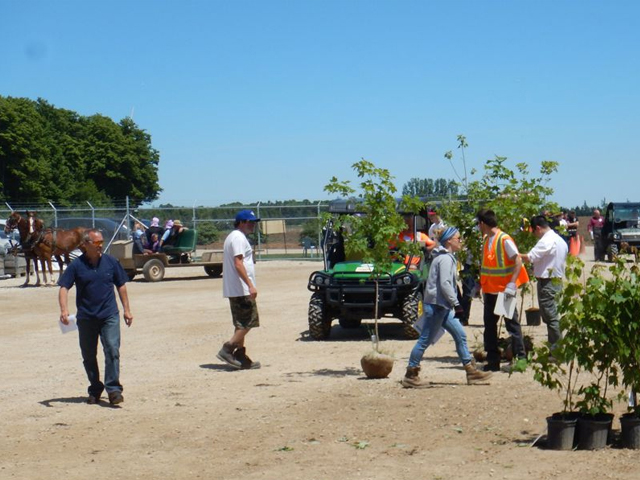 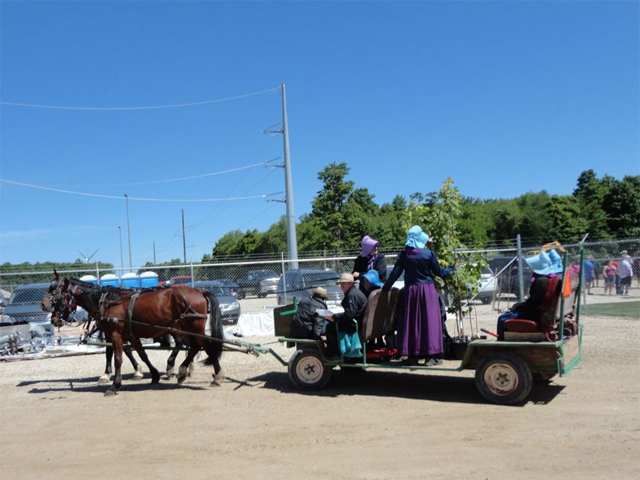 Canadian Senator Victor Oh came to Shelburne to meet with Dufferin Wind Power officials and to tour the project’s construction site. Dufferin Wind Power is the first wind farm project in Canada to attract Chinese investment. This was likely of particular interest to Senator Oh, well known for promoting multiculturalism and for helping newcomers to Canada get established as individuals and as business owners.

Mr. Oh is also the founding chairman of the Canada-China Business Communication Council. “We were very honoured to have the Senator visit us. During his tour he encouraged us to develop and invest in more wind power and solar power projects in Ontario and perhaps the rest of Canada as well,” explains Zhu Dong, Vice-President, Dufferin Wind Power. “Senator Oh also impressed upon us the hope that we keep the communication going and that we work together with local communities and municipalities beyond the commercial operation of the wind farm. Which of course, we look forward to doing,” he says.

In Dufferin County this past December, the combined efforts of Dufferin Wind Power, Mortenson Construction and all the sub-contractors and craft workers made the holidays brighter for families and individuals in the community.

A Look at the Recipients

The Christmas Assistance Program is a collaborative effort by members of the Shelburne Lions Club, the Rotary Club and the Kinsmen Club of Shelburne. The Program is coordinated by Lynn Topping (also a Trustee for Hyland Heights Elementary School). The Program accepts non-perishable food items and new toys to meet the needs and wish-lists of qualifying local applicant families. This year they processed and registered 46 applications from qualifying families. Lynn explains that the success of the Program depends on many people in the community: from Laurie Rutledge and his fellow Rotarians who picked up all the donations around town, to the schools and centres that collect the donations, to Doug King and his Kinsmen who make up the food hampers, to the people who deliver them.

The DWPI/Mortenson team contributed new toys, cases of cranberry sauce & gravy and department store and grocery store gift certificates, as well as any other items needed for the effort which were not already collected. Grocery Store gift certificates were used to purchase any other items needed for the baskets, including turkeys. Dufferin Wind Power Landowners also made monetary contributions directly to the program when they learned of Dufferin Wind Power’s involvement via regular landowner update communications.

Christmas Cheer Food Bank provides food baskets and new toys to families in the town of Dundalk and surrounding areas.

Dufferin Oaks Long Term Care Facility is a County-run non-profit located in Shelburne and each year they hold a door decorating competition in each of the five wings in the facility.  Mortenson and Dufferin Wind Power sponsored the event by providing prizes and materials to make this activity a success. In addition, the program received $200 worth of general arts-and-crafts materials provided by Roberts Marketing that they had delivered to the facility in three over-sized gift bags just before Christmas. Items included card-making kits, paints and paint brushes, wooden cut-outs, scissors and glue, modelling clay, paper and much more.

Southgate Community Connection Program is a new and creative charity effort in the Dundalk area coordinated by Linda Woodbury. Each month volunteers from three church groups come together to cook a fresh and hot meal for the community. In December, they managed to provide for 140 people in need. They have also started to offer used clothing and toys.  Mortenson and DWPI collected new and used items from subcontractors and craft workers onsite and purchased cases of food to support their programs.

Dufferin Wind Power and Mortenson Construction would like to recognize and thank McCarthy Signs for donating the graphics of a giant gift tag that was placed on the collection and delivery trailer, and Paragon Printing in Mississauga for donating paper and vinyl posters which promoted the campaign on the construction site and trailer.

Dufferin Wind Power Inc. is making long-term investments in Ontario’s green energy future and is seeking your participation. DWPI received Renewable Energy Approval from the Ministry of the Environment on June 10, 2013 for its wind power project in Dufferin County. The project will generate 91.4 megawatts of wind power, enough to power between 22,500 and 30,000 households per year. This notice is the first step in establishing a Community Liaison Committee (CLC) to provide a venue for meaningful and ongoing discussion between the project team and community members.

How are we listening?

Dillon Consulting is creating this Community Liaison Committee in Dufferin County to discuss the construction, operation and decommissioning of the Dufferin Wind Farm. This will be an opportunity for approximately 20 selected CLC members to:

Become a member of the CLC

Interested in representing your community and discussing the Dufferin Wind Farm? CLC members will be responsible for attending a minimum of four (4) meetings over a two-year period. Meetings will take place on a weekday evening for approximately two to three hours each. Membership selection will be based on balanced representation from the various groups listed above.